She began her training to become a family medicine physician in Tennessee. And 25 years ago, she teamed up with a group of six other local physicians and opened a private practice in Mayville, Tennessee.

“Several of the physicians in our community decided to start a multispecialty group,” she says. “We gradually grew it over the years, and ultimately ended up in our own building.”

Over the years they expanded their practice, which housed its own lab and radiology. After 25 years of success, they were courted by the local hospital system who ultimately bought them out.

“The timing was good for most of us, because we were getting up there in age — 40s, early 50s — and we thought this would be a win-win situation,” she recalls. “Part of the contract with the hospital required us to work for an additional three years and then we’d be released from the contract.”

This timeline perfectly coincided with the plan she and her husband made: being independent and just “doing what they wanted to do” when they reached their 50s. They hadn’t predetermined what that would look like, but they just wanted the freedom to choose what that looked like.

“By that time I was ready to take a break from private practice,” she says. “The traditional method of practicing medicine was wonderful, but I was ready for something different. That’s when I began looking into doing locum tenens work.”

Dr. McCroskey urges anyone thinking about working locum tenens to start their research early. She says it’s also crucial to make sure spouses are included in the decision-making process when choosing an assignment.

“My husband and I knew we wanted to do some traveling, and we knew the type of environment we wanted to live in,” she says, “so I started looking a couple of years ahead of time. We also had to make sure there was something for him to do and that he was comfortable with where we were going. I’ve heard stories of folks whose spouse hasn’t been able to find anything, and they’ve just been miserable.”

Her first assignment landed them in Maui, where she worked in a small outpatient clinic. After working there for four months, she decided to take breaks between assignments so they could fully enjoy Maui living.

Not only was Dr. McCroskey taking advantage of the island life, but her retired husband was able to follow his dream and found a job at one of their local SCUBA shops and began giving diving lessons. She and her husband also took advantage of their location to use Maui as a jumping-off point for their travels during the time she took off between assignments.

Dr. McCroskey also found that the locals were used to locums (they are known as “travelers”), and they treat them like family.

“Patients were very comfortable sharing their culture, and freely answered questions about themselves and their culture,” she says. “I’d ask them to share something about their lives. The urgent care clinic where I worked was a small enough place I would run into the same patients multiple times.”

She recalls a patient who told her about her son who was an accomplished musician and would be performing at the Maui County Fair. She and her husband made a point of going to see his performance.

“I had a lot of experiences like this,” she says. “Patients would tell me the locals’ way to get to off-the-beaten-path beaches and surf sites. Things like these make working locums special, make your experiences in these different communities memorable.”

Having become accustomed to island living, Dr. McCroskey and her husband decided to broaden their search, and soon found she was drawn to the prospect of working international locum tenens. That’s when she was presented an opportunity in the Caribbean.

“There was a physician who had been terribly impacted by Hurricanes Irma and Maria and had to relocate her family to the mainland, but was also trying to keep her practice going on St. Thomas,” she says. “She needed help while she was out of town.”

While working this assignment, she found a local pediatrician who needed some help. She ended up working for the two physicians on St. Thomas and is currently working exclusively with these two docs.

“We decided to stay for about a year, and I’ll be finishing up my assignments here shortly,” she says. “This scenario has been a little tougher since I’m working for single physicians as opposed to a big medical support system like Kaiser.”

Not without its challenges

She did, however, find that licensing for her assignments in Hawaii and the Caribbean were a bit more challenging than the traditional process. Rather than doing the licensing electronically, as is the norm in other states, in Hawaii it’s done entirely on paper, which ultimately resulted in a six-month licensing process. In the Virgin Islands, it was even more complicated.

“For one, it wasn’t simple to even find out what the licensing requirements were,” she explains. “And malpractice is handled differently. You have to buy it from the territorial government through their department of health. They have tort reform so the limits on it are very different than they are on the mainland. The whole process took six months.”

Locum tenens at any career stage

Dr. McCroskey chuckles when she hears doctors say they’re “not ready” to work locums. She’s sure to let them know that it’s not just for those nearing retirement, and is happy to fill them in on the benefits of locums.

“I tell them they can do it at any time in their career, work locums for the experiences,” she says. “They ask me what kind of physicians it would be appropriate for, and I’m sure to let them know it’s for any type of physician. I tell them there’s a bit of uncertainty at first, but if you’re burned out or want to try something different, it’s perfect. 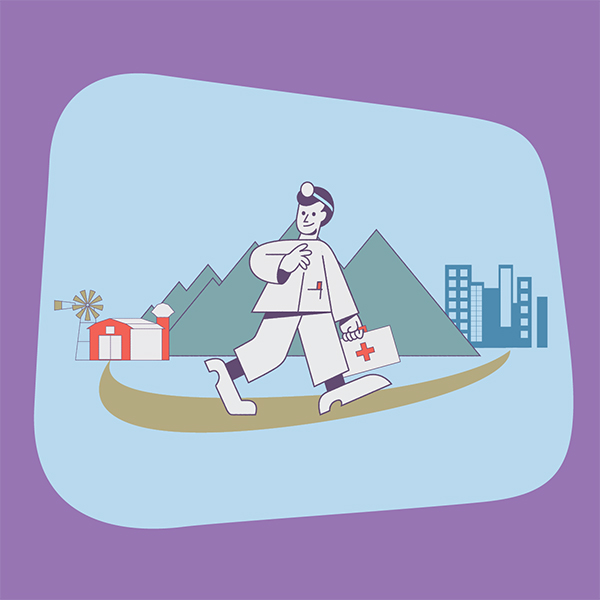