Physicians turn to locum tenens for a variety of reasons — schedule flexibility, opportunity to travel, and higher pay to name a few — but locums isn’t the right fit for everyone. Here’s a look at a few of the pros and cons of locum tenens from the perspective of four doctors who worked locum tenens out of residency.

Dr. Umesh Bhandari, a psychiatrist, began taking locums assignments right out of residency because he wasn’t sure where he wanted to settle down. For him, the main benefit of locum tenens has been the flexible scheduling — the ability to choose when, where, and how long he works.

“Because they’re in such dire need of providers, a lot of places are willing to take weekend work, one week a month, two weeks a month, and typically they’re pretty open to filling in additional days if need be,” he says. The freedom of locum tenens has allowed him build a schedule that best suits him and practice in lots of different locations.

With so much control over his schedule, Dr. Bhandari’s work/life balance is generously tilted towards life. In his time off work, Dr. Bhandari enjoys kayaking, hiking, snowboarding, and even snowmobiling. “I definitely take advantage of the opportunity to do fun things wherever I’m assigned,” he says.

Dr. Bhandari says accepting a permanent position somewhere would be hard after having so much freedom. “If there’s a place that offers a psych hospitalist seven days on, seven days off, or two weeks on, two weeks off — and that gave me the flexibility to still do other assignments — I might be open to it,” he says. If not, he’ll stick with locums.

Family medicine physician Dr. Harshal Patel turned to locums soon after his residency because his wife, who is also a doctor, was still completing her own residency. Now that she’s finished, the two doctors would like to find permanent positions in the same city. Until they do, they’re both working locums.

For Dr. Patel, the main downside of locum tenens is continuity of care. In family medicine, continuity of care is a challenge for locum physicians, and he misses it. “Some of my most revered mentors took care of four generations of families,” he says. “That’s awesome and that’s what I want to do, but it’s just not right for me at this time.”

After working a variety of settings, he admits that continuity of care isn’t what it used to be. “These days, I think less and less people care about it,” he says. “And electronic medical records make it so that continuity is not as much of an issue anymore.”

Dr. Bassam Rimawi, a physician in reproductive infectious diseases and maternal-fetal medicine, liked that locum tenens gave him the opportunity to deepen and broaden his experience. After residency, there was no doubt about his qualifications. He could have accepted a position just about anywhere. Still, he wanted to gain more experience before taking a permanent job.

Once Dr. Rimawi finally did take a permanent position, his colleagues expressed surprise at the depth of Dr. Rimawi’s experience. “’Yeah, well, I did a lot of locum work,” he’d tell them. Today, if a doctor asks Dr. Rimawi what he thinks of locums, he enthusiastically recommends it.

Con: Time away from home

Dr. Mojgan Saber loves to travel, so much so that immediately following her residency at UCLA, she took a short sabbatical to Europe. The multi-month trip was expensive and upon her return, she needed to find work quickly. She chose locums because it answered that need.

She soon discovered that locum tenens meant even more travel, and she loved it! For her, locums was a way to explore the country. “I usually chose new places so I could learn about that place,” she says. “Meanwhile, I was working, making money, meeting new people, getting to learn different systems at different hospitals.” In certain cases, she heard about festivals and other events she wanted to attend, then found an assignment nearby.

Dr. Saber says she’s the first to admit that locums probably doesn’t work for everyone. “Honestly, because of the person I am, I didn’t feel many disadvantages,” she says. “But I can imagine that for somebody with a family it might be difficult. If you have children that need to go to school or if you have a partner and they have a permanent job in another city, then the distance could be an issue.”

Is locum tenens a right fit for you?

Locum tenens can be a great opportunity for new attending physicians, but it all depends on your personality, goals, and life situation. If you want more control over your schedule, like to travel, and want to be well compensated for your time, locum tenens could be the right fit for you. Of course, like any job, you’ll probably encounter a drawback or two — and maybe even an assignment you don’t like. But the good thing about locums: it isn’t permanent. 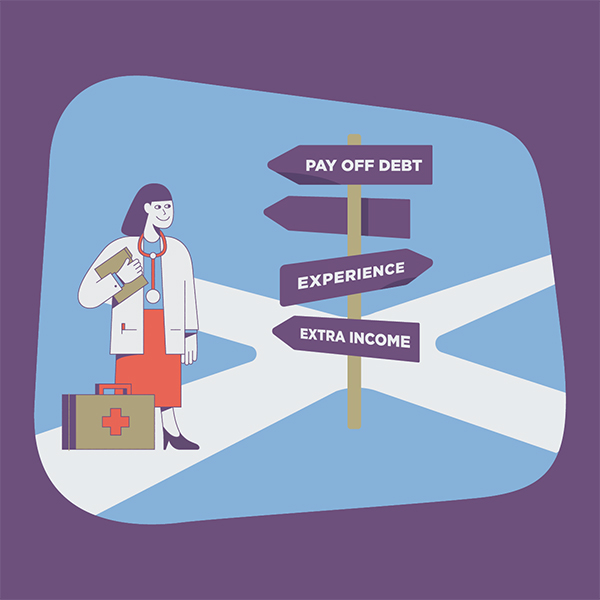