Working locum tenens part-time on the side is a good fit for neurosurgery physician assistant Stacy Hicks. He looks forward to the extra paycheck, he’s worked out how to keep in constant and meaningful contact with his family when he’s away, and he finds working in different settings to be rewarding.

Discovering a love of medicine early on

Stacy’s path to becoming a PA began early and in a slightly unusual manner. When he was 14, he worked in a pharmacy. He says he felt he’s always had a knack for medicine and looked forward to the times he’d be able to take blood pressures at the local hospital.

“This got me really interested in medicine,” Stacy says. “Then not too much later, I joined the Air Force and became a flight medic, which seemed like a natural fit. I did that for six years before I went into nursing school. Six years after that, I decided to go to PA school.”

A workaholic at heart, but family comes first

Currently, Stacy is working a full-time job and picking up locum tenens shifts part time when he’s able to. He’s committed to working locums at least one week a month, but since the facility where he’s working appreciates having him so much, he sometimes picks up extra days as well.

When asked how he’s able to work a full-time job while working locums on the side, Stacy says he’s always had two jobs. “People always think I’m crazy for working that much,” he says. “But I enjoy work, so I don’t know what I’d do if I couldn’t do it.”

Aside from the fact that he’s a self-described workaholic, he’s committed to staying fully connected to his wife and two small children at home.

His two-year-old and four-year-old sons love speaking to him on Facetime, and he uses this opportunity to read them books and wish them good night.

“All of this traveling requires phone calls and Facetime. I’ll call them when I’m off shift at 7 a.m., nap for a bit, then call them midday,” Stacy shares. “That way I keep that connection — because sometimes my kids have a little breakdown when I’m not there from time to time.”

But, he jokes, “They’re great and miss me when I’m gone, and then when I get back they spend two hours with me and then they’re back into their own world; they don’t even know I’m back half the time.” 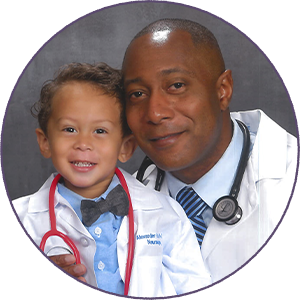 The upsides of working locum tenens

The positives Stacy has experienced working locum tenens have been numerous — and far outweigh the downsides.

“Obviously the pay is one thing. The biggest benefit is you get to practice and see more people and get out there a little bit. I think it helps broaden your expertise in different areas. I’m able to take what I know from working at a Level I trauma hospital where I work full time, and I can take that expertise to a Level II hospital where I can now excel with that knowledge.”

Another benefit Stacy’s found is the hours working locum tenens are less stressful as well. Working locum tenens is kind of a “break” from his full-time job. He’s found he makes the same amount of money, but since the usual deductions for insurance and taxes don’t come out of his check as an independent contractor, it leaves him with a “nice income.”

With the ups come the downsides

For Stacy, traveling and its inevitable consequences are two of the only downsides he’s found.

“Traveling typically comes with the territory, but I don’t mind it. I was in the Air Force and I flew a lot, so it doesn’t bother me,” he says. “You’re away from your family, but it’s miniscule compared to the other stuff.”

Another difficulty with locum tenens is the “not knowing,” or the initial trepidation that comes with being in a new place, learning new things. But he says he’s become more acclimated to change.

Regardless, Stacy insists he’ll continue working locum tenens, even if it’s on a part-time basis. “I’ve always had two jobs for some odd reason. I do a lot of trauma call, so I work 24-hour shifts and I don’t take a post-call day like residents do. The hours I work locums are definitely less, and it’s less stressful as well.”

Advice for other PAs

His recommendation for those PAs who are on the fence? “They should at least try it. Because you’ll never know what you’re going to get. One of the best things about locums is it’s almost like test-driving a new car. It could be an assignment that could lead you into a new job,” he says. “It will take you to areas that you probably would never go or even try. You may say, ‘I’ll never work in that state,’ but working in the area may change your mind.”

“By working locums, you can build friendships, try new locations, learn new techniques, and maybe even ‘test drive’ that new job that’s been waiting for you.”

Getting out of the cold: One locums’ freedom to follow the warmth
Locum tenens as a couple: Alignment is key
Comment