Although he formally retired from practicing full-time medicine in 2003, internal medicine physician Dr. Sanat Bakshi decided he wasn’t ready to give up practicing altogether.

“When I retired, I felt like I didn’t want to fully stop practicing,” Dr. Bakshi says. “I wanted to keep contact with a profession that I’ve been associated with for so many decades.” Locum tenens turned out to be the perfect solution. “I could still practice medicine after retirement and set my own time and hours when I felt like working. It’s very convenient and flexible.”

Continuing with the VA

Dr. Bakshi spent almost his entire career working with the Veterans Administration, so when he decided to work locums after retiring from full-time, contractual work, he decided to continue working within that system as a locum tenens. Since his regular job assignment already had him working in various VA hospitals around the country, the transition to working locum tenens was almost a natural one.

“When I was working my full-time job, I changed from one location to another and it was usually because I was getting a better deal and a promotion within the department and that sort of thing, until I retired as a chief of the medical service,” Dr. Bakshi shares. “My wife and I like to travel and meet people and see the country, so this was a good way to do it and still work professionally.”

Although they have enjoyed many different locums assignments, one in particular made a lasting impression upon him and his wife.

“We always wanted to explore Alaska. We had done a cruise, but living in Alaska and experiencing it like an Alaskan was what attracted me to accept an assignment in the VA in Anchorage,” he says. “The three months we were there, we explored Alaska like no ordinary cruise would let you do.”

Dr. Bakshi and his wife took every opportunity to explore and learn as much as they could about their temporary home base. “We have become very familiar with Alaska because every weekend we used to get out and go in different directions. We saw different places and met people and explored beautiful locations and National Parks all over Alaska. In fact, we even went well beyond the Arctic Circle a couple of times.”

His only regret is that they didn’t get to see the Northern Lights. “We were not there at the proper time but we saw most of the rest of it.” 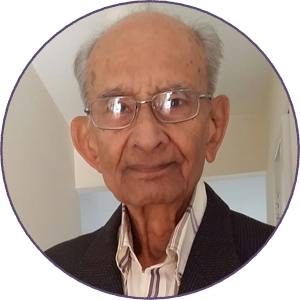 “It was important for me to decide when I wanted to work and where,” he says. “I had a lot of flexibility. I could choose where I wanted to work as well as the nature of the work I wanted. I still wanted to practice medicine — and I could have worked as a hospitalist — but I decided I didn’t want to carry a pager or beeper with me. An office setting, like a regular clinic, was what I settled for.”

“The problem with many physician retirees I’ve met is that they suddenly find themselves in a vacuum. They get very emotionally and mentally upset about having very little to do after being professionally active most of their lives,” he says. “With locums, retiring physicians can at least keep practicing medicine — what they’ve always done — instead of leaving medicine altogether.”

In 2019, after working locum tenens for 16 years, Dr. Bakshi decided it was time to fully retire from practicing medicine.

“After retirement we moved to Virginia, near Washington D.C., to a small town called Vienna,” he shares. “The reason we moved there was because our daughter, who is also a physician, is practicing here and so it was natural for us to want to live close to her and to the grandchildren.”

While locums was a perfect way for Dr. Bakshi and his wife to continue practicing medicine after traditional retirement age, they decided it was their time to settle down and be near family. Now they travel purely for enjoyment. Maybe they’ll even be able to see the Northern Lights — at just the perfect time.

How locums helps one Hawaii psychiatrist treat the marginalized
The spouse’s take: What locum tenens means for my family
Comment